A Journey of Love

Tina Warawa’s love affair with hockey began long before she had children.

It began when she started dating a fella who loved the sport and had been on the ice for years, ever since he was a U7 player himself, and continued to when he played recreational hockey.

“My husband Jeff kept playing hockey over the years and after we had our two sons he started coaching and was vice president of Andrew Minor Hockey. I was manager of the teams he coached every year. In 2008 when he passed away he was coaching for a Mundare/Andrew combined team. The following year as he was supposed to step into the role of President for Andrew I became president in his place and stayed in the position for two years before moving to Vegreville.”

Tina’s oldest son Justin began playing in Vegreville at the U11 level while her youngest son Colby played all his years in Vegreville. “In our 12 years in Vegreville, I have managed a team nine years, been Vice president two years and president four years. The boys have played spring hockey also for a few teams including the junior oil kings and the Next Level.  I have sat on the board for a spring AAA Association and also have served as both a League Governor for the Northern Alberta Interlock league and sat on the league board as a Governor Policy Liaison. I was honoured to receive the award from Hockey Alberta for “Outstanding Contributions to Minor Hockey” a few years ago, and I have a feeling I will never really be able to quit going to the rink.”

Tina says there have been so many memorable moments on and off the ice. “One thing I will never forget is Justin’s last game in minor hockey for U-18(Midget). We were playing for gold, in a series against Barrhead. It was a best of 3 and we had won game 1 and then rented a bus to head to Barrhead for the win but we had a terrible game and were crushed with an 8-1 loss. We came back to play the final game. The game took place in the Mundare rink. The irony for our family is our very first year as Vegreville players Justin also played for gold and the final took place in Mundare rink. That time we won and brought the very first gold banner from the new 1660 league home for the association.

As the kids hit the ice for this game in U-18 many parents had tears. Fourteen years of trips to the rink, late snowy drives, and so many memories all coming down to one 60 minute game. The kids played so hard and ended the second period ahead. I remember crying in the stands as they hit the ice in the third period because I knew it was the very last time I would ever watch him step on the ice as a minor hockey player.

I saw flashes of him as a little seven-year-old hitting the ice for the first time. The boys were up 5-0 and with the clock turning to the last minute, Coach Peter Ling made sure that all the third year kids were on the ice for the shift, and with 10 seconds left they threw off their gloves and rushed to hug their goalie. They won gold and I cried, and so did many parents around me, including many tough dads; we cried happy tears and a bit of sadness for the official end of a 14-year journey.”

Tina never really kept track of all the kilometers she drove, except for one year. She explains, “Justin was in the U-18 and Colby was a U13. Both boys played in 3 tournaments that year and I figured out that we made just over 12,500 kilometers in travel, and for fun, we figured out not drive time, but time in the actual rink for practices and games combined was 558 hours not including any tournaments.”

Some rock tunes from AC/DC, including their famous number ‘Thunderstruck’, was a popular choice during road trips as well as ‘We Are the Champions’ by Queen that was played after any good victory. Tina loves watching kids on the ice more than she can explain, but credits her late husband who loved the sport and spoke of all the great memories, the discipline hockey teaches, and most importantly, the respect you learn and the friendships you make. 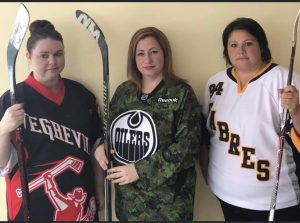 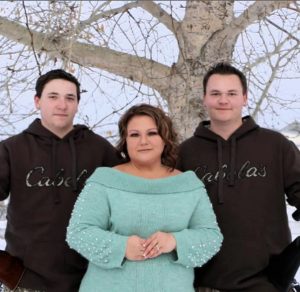 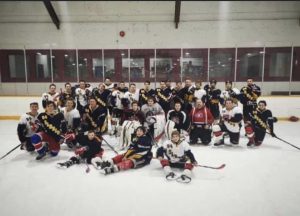 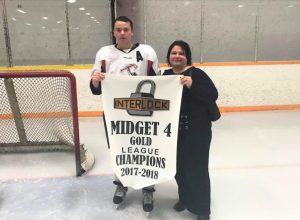 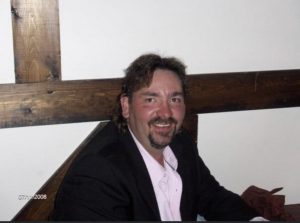 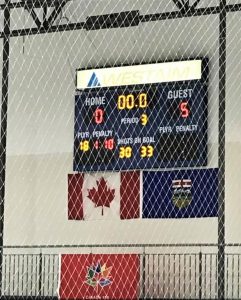 Good as Gold for Val Sweeting and Team Canada