The Vegreville RCMP Detachment lowered its flags shortly after 3 pm on Sunday, (April 19) after hearing of the death of RCMP Cst. Heidi Stevenson who was killed in the line of duty during a mass shooting in Colchester County, Nova Scotia. 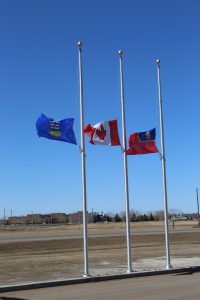 Cpl. Leigh Drinkwater said the flags were lowered to half-mast after receiving news of the tragic death of the 23 year veteran of the force. The same was done outside of the Vegreville Legion Branch No.39 that afternoon. The Town of Vegreville Emergency Services and St. Joseph’s General Hospital also lowered their flags.

Cpl. Drinkwater said RCMP members and Peace Officers wear mourning ribbons on their left breast pocket out of respect and to honour the fallen RCMP member. The flags will remain at half-mast until the day after Stevenson’s memorial.

Vegreville Mayor Tim MacPhee, who hails from Nova Scotia, stated, “I felt sick to my stomach as those community names were coming forward all morning knowing that my immediate family and most of my friends live in all those communities, and knowing the history and culture and the character of those people in these rural settings. One would never imagine a tragedy like this one happening there but I know they will find a way to get through it. It’s just the Nova Scotia way.”

MacPhee was born in Truro and moved to Brookefield and spent his teenage years in Stewiacke. All three of those communities are located in Colchester County.

Rod Stewart, who serves as the Honours and Awards Chairman of the Vegreville Legion stated,

“Our condolences go out to Cst. Stevenson’s family and to her fellow members of the RCMP.” 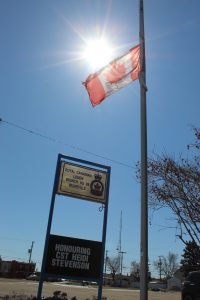 He went on to say, “The Royal Canadian Legion considers anyone who has served and been honourably released, or is still serving in Canada’s military, plus members of The Royal Canadian Mounted Police to be veterans. The death of Cst. Heidi Stevenson is a reminder to everyone of the dangers faced on a daily basis by those who wear a uniform. Lowering the Legion Branch flag is an act of remembrance performed on the loss of every veteran or on-duty serving member.

“Today our thoughts and prayers are with the people of Nova Scotia, who are dealing with the devastating shock and grief following the recent mass shooting in a small rural community. Covenant Health and St. Joseph’s General Hospital join all of Alberta in commemorating the lives lost in this unimaginable tragedy and have lowered our flags to half-mast,” stated Site Administrator Anthony Brannen.

RCMP said the incident began on April 18 when police were called to respond to a “firearms complaint” in the small, rural town of Portapique. Residents were told to stay indoors. Officers found multiple casualties both inside and outside of the home, but the shooter was gone. The following morning RCMP are still on scene and describe the investigation as an active shooter situation. Shortly after, police publicly identify Gabriel Wortman as the suspected gunman and release his photo. Wortman was disguised as a police officer. He set fire to several homes and shot more than 22 people in different rural communities within a 90-kilometre radius.